Title: "Once, I remember, we came upon a man-of-war anchored off the coast. There wasn't even a shed there, and she was shelling the bush. It appears the French had one of their wars going on thereabouts. Her ensign dropped limp like a rag; the muzzles of the long six-inch guns stuck out all over the low hull; the greasy, slimy swell swung her up lazily and let her down, swaying her thin masts. In the empty immensity of earth, sky, and water, there she was, incomprehensible, firing into a continent. Pop, would go one of the six-inch guns; a small flame would dart and vanish, a little white smoke would disappear, a tiny projectile would give a feeble screech -- and nothing happened. Nothing could happen." 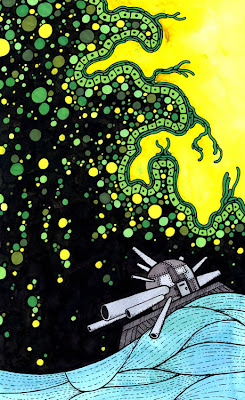 Email ThisBlogThis!Share to TwitterShare to FacebookShare to Pinterest
Labels: works: heart of darkness (an illustration for every page)