In October, I was invited by author Robert Kloss and the web site Sundog Lit to create some kind of work reacting to Robert's amazing new novel The Alligators of Abraham, which I had also created the cover and three interior illustrations for, in any way I saw fit. This kind of artistic freedom is very rare, so the opportunity excited me. Robert asked me to focus specifically on the final section of the book and rather than simply visually depict portions of the narrative, I took a different approach. I read and re-read that section several times and took the ideas and impressions I drew from those readings and gave them visual form. Not quite a re-mix or even an interpretation, more a reaction or a visual conversation with the text and the author. I'm very proud of these and think that the four pieces I created were a new plateau for me. Since they've been posted on the Sundog Lit site for almost two weeks now, I thought I would post them here as well. Here is the first of those four, and if you like these, you should really track down The Alligators of Abraham. It is phenomenal. 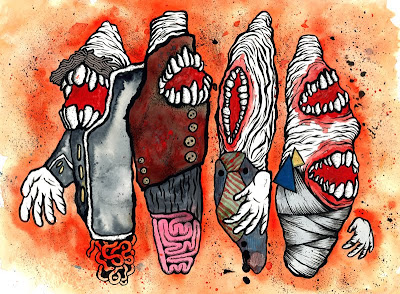