The third collaborative project I am happy to announce is a series of illustrations depicting each of the cities from Italo Calvino's Invisible Cities. I am undertaking this endeavor in partnership with two good friends who are also artists, Leighton Connor and Joe Kuth. These will exist on a tumblr named Seeing Calvino, since we hope to continue to explore his writing in future projetcs.

The way this works is that each week, on Wednesday, one of us will post our illustration of one of the cities. We are moving through the book sequentially, from beginning to end, as one might undertake a journey. For now, we have established the rotation of me first, followed by Joe, followed by Leighton, and back to me to repeat the order again. It is a daunting and exciting project because there is so much latitude in Calvino's pieces, and so many ways to stumble. I feel like I'm getting a good handle on it, and I am excited to see what Joe and Leighton do as well.

I will be cross-posting my own illustrations on my blog and tumblr as well as the Seeing Calvino tumblr, but you will have to visit Seeing Calvino to see the work of Joe and Leighton. Here is my first piece, and the first of the Invisible Cities. This one time, I am reproducing the entirety of what Calvino wrote about Diomira, to provide some context.

"Leaving there and proceeding for three days toward the east, you reach Diomira, a city with sixty silver domes, bronze statues of all the gods, streets paved with lead, a crystal theater, a golden cock that crows each morning on a tower. All these beauties will already be familiar to the visitor, who has seen them also in other cities. But the special quality of this city for the man who arrives there on a September evening, when the days are growing shorter and the multicolored lamps are lighted all at once at the doors of the food stalls and from a terrace a woman's voice cries ooh!, is that he feels envy toward those who now believe they have once before lived an evening identical to this and who think they were happy, that time." 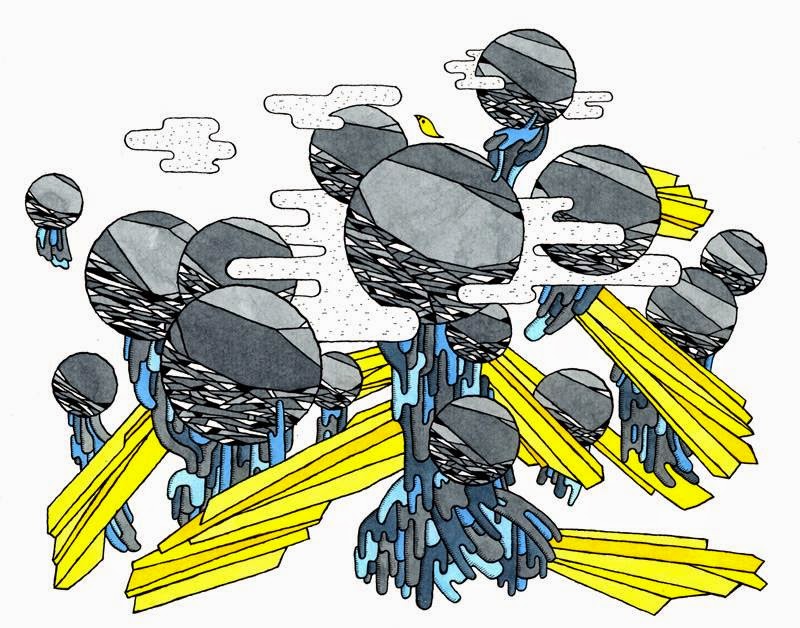