(Again, I finished this late last night, scanned it, posted it, and then went to sleep with a mildly swelling itching brain. As I lay in bed trying to get some sleep, an entirely new illustration for this line of text - one that better connects the whale and phrenology - slowly swam to the surface of my consciousness. It was much too late at night for me to start work on it, but I am going to finish it today, scan it, and post it later tonight. I'll also be posting the next illustration for page 335. I'm truly not certain why there has been such an abundance of visions lately. In general, it's a very good thing but I am going to be working harder to clarify my ideas for each piece so that I can continue to progress through the novel rather than make 2 or 3 illustrations for each page. I'll save some of these ideas for the second time I make an illustration for every page of Moby-Dick a few years from now. Ha!)

Title: To scan the lines of his face, or feel the bumps on the head of this Leviathan; this is a thing which no Physiognomist or Phrenologist has as yet undertaken. 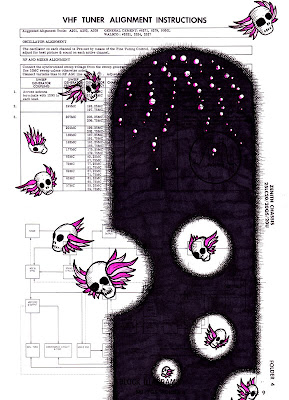