Title: Besides, when making a passage from one feeding-ground to another, the Sperm Whales, guided by some infallible instinct—say, rather, secret intelligence from the Deity—mostly swim in veins, as they are called; continuing their way along a given ocean-line with such undeviating exactitude, that no ship ever sailed her course, by any chart, with one tithe of such marvellous precision. 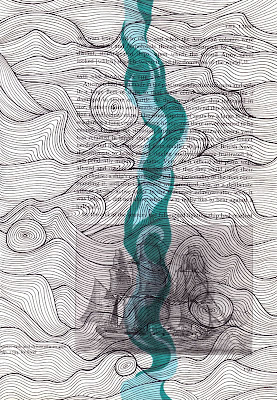 Email ThisBlogThis!Share to TwitterShare to FacebookShare to Pinterest
Labels: works: moby-dick (an illustration for every page)